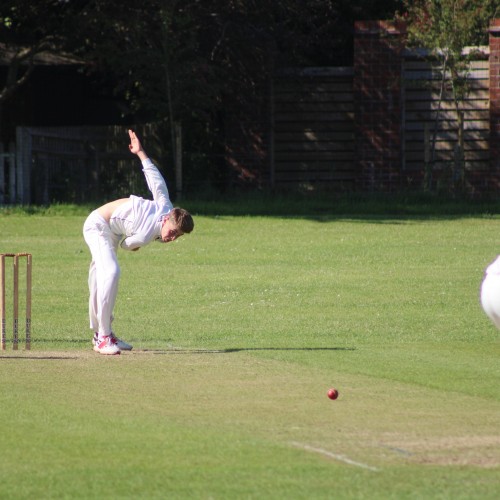 As collapses go Shipton's beat the fall of the holy roman empire, the collapse of the Romanovs, the Ottomans, the Hapsburgs, the twin towers and any other collapse you can think of. From 60 - 2 @ 5 an over to 81 all out ten overs later. Phil Armstrong taking 7 - 19 With the introduction of the ten over bowling restriction, these exceptional figures have become a rarity, so well done to Phil, we'll all be looking forward to a long dry summer and some turning wickets.
We lost a couple early on, but Rhino and Joe steadied things until the collision. Which seemed to affect the big man more than the skipper. Rhino edged to the keeper, (we heard it 60 yards away) he stood his ground, the umpire gave him every chance to do the decent thing, but as befits someone brought up in the southern hemisphere, he let the umpire do the honours, which he duly did. Joe hung on and it was all over in 19 overs. Well done to all.

Given the early finish, my chauffeur took me across town to watch the 3rd's and imagine my delight at seeing all of those old faces. Robson, Lynch(flat track bully) Roche, all of which I have a vague recollection of playing alongside. Wantage is a lovely ground to play cricket, it should be as we do a lot of the preparation! I was disappointed to miss the talented Alec Lynch score his 122. I did however, see Mike Hannaby in charge and the few overs I watched the youngsters bowling well.
By this time, tired and emotional I was driven home and put to bed and missed Rochey bowl!