2nd's away to Kidlington 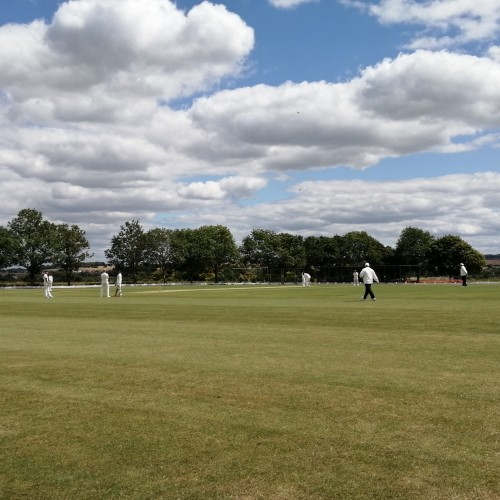 On Saturday, Challow 2nds travelled to Kidlington in a battle of the unknown. On a hot day, Tom Pill anticipated batting first, however, the wicket was unexpectedly damp and with the expectation for it to dry out later in the day- Pill won the toss and opted to bowl.
With the combination of Joe Durie being absent and Will Humphries being swapped for Mike Konschel in the 1st team, there was a different new ball opening partnership for Challow. Both Will and fellow opener Marc Gregory struggled early on, giving away plenty of free runs in extras and short deliveries. With Kidlington racing along, Dan Cook and Blake Bint, both promoted from the 3rd team, were given the ball in an attempt to slow the game down and make the breakthrough. Both failed to cause a breakthrough yet built plenty of pressure and chances were coming. When Alex Dawson was brought into the attack, he managed to strike, with a no shot LBW. At 71-1, Kidlington were still in a free flowing position. When Humphries was given a chance to redeem himself, he managed to do so with much more control in his second spell, along with both Dawson and tight bowling from Gareth Kent at the other end. When Humpries and Dawson both broke through, Challow looked to fight back. A second spell from Gregory in the middle overs changed the game. Kidlington skipper and opening batsman, Andy Oliver remained at the crease until he fell for the 7th wicket as he looked to tire and run out of partners. Gregory was making things happen clearing up Oliver(60) and the entire middle order. Achieving figures of 6-37, a massive comeback from his opening spell. Dan Cook and Alex Dawson from each end were tried when Kent and Gregory finished their spells but failed to add to the wicket column with Kamran Ramzan hitting a couple boundaries from the number 9 position and adding some damage. It was then Bint brought on for the tiring Cook to end the innings on 184. A score that looked very achievable on a now, flat pitch. From 150-3, Gregory's efforts in the middle overs managed to pull the game back brilliantly.

Going into the second innings, Challow got off to the worst possible start, losing Jay Mumtaz within the first over. Luke Jones looked to play a typical innings for him when he went out counterattacking and playing plenty of shots. His partnerships of 24 and 27 with Callum Betts and Tom Pill looked to add a slight bit of stability until he fell for an good looking 25 from 27 deliveries. Gareth Kent(0) and Alex Dawson(2) failed to put any pressure back on the bowlers following Jones' dismissal. At 69-5 and still 116 to win, the hopes of a 75 point weekend looked to be ruined by the 2nds. However, Harry Robson batted very well for an underappreciated 6 runs from 42 balls; playing very smartly, knowing that extras will come and Pill was comfortable scoring from the other end. Due to the strong foundations Luke Jones gave from the start of the inngings, the run rate was never going to be an issue. After a crucial 48 run partnership, Robson eventually fell to a top edge. At 117-6, and Challow now looking to be into their long tail the game was still in the balance. Pill's wicket was invaluable at this stage. Dan Cook walked to the crease and after looking scratchy early on, he decided he wanted to get back early when he started playing plenty of shots and looked well out of place at number 8. As the runs required began to deteriorate, you could see the heads drop on the Kidlington players. With that, Cook(39no) and Pill(73no) saw Challow home with a remarkable unbeaten 69 partnership, getting the job done with 3.4 overs to spare and completing the 75 point weekend as set up by champagne performances in both the 1st and 3rd teams.