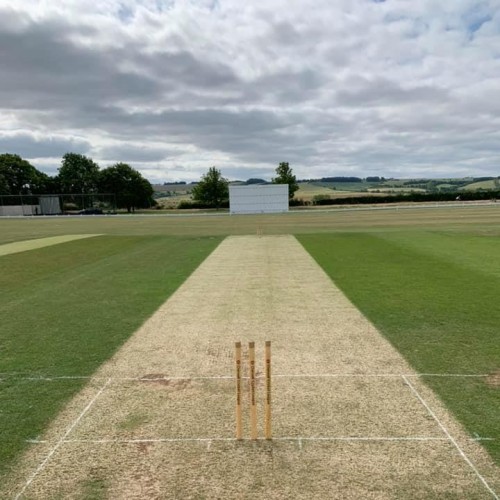 Challow Hammer Local Rivals
In the final pre season game Challow played a double header with Didcot. With the 2nd XI getting a convincing win at home, it was down to the 1st XI to achieve a double over their locals.
On a cold, damp day Challow skipper Joe Harris won the toss and put Didcot in. From one end Ross Packham kept it tight with former Challow player- Vishane Perera frequently at the other end. With Perera dropped on 9 at cover, Packham's wicketless pre-season continued despite impressive economical figures of 0-15. From the other end, Conor Jones saw a few balls go to the boundary as fellow Didcot opener Adam Webb started strongly before Jones knocked him over with a bit of magic for 17. Jones' first wicket was spurred on by some more quality as he then went on to take 2 more in his opening spell, dismissing Rohilla(0) and Hills(1) shortly after. After a long opening spell, Jones returned with impressive figures of 3-33. In a spot of bother at 37-3 Didcot had some rebuilding to do. With youngster Jacob Townsend joining Perera at the crease, Didcot struggled to pile runs on quickly. Despite some loose deliveries from Joe Harris and Will Humphries, Didcot continued to score at a very steady rate. Townsend, after building up a few dots felt pressured to get to the other end as he then proceeded to attempt a single to Ryan Gordon at cover who kept his composure when Perera sent Townsend back. The youngster falling for just 10. Perera took matters into his own hands in Humphries' final over hitting him for 2 sixes to the short leg side boundary. Humphries finishing with figures of 0-33. His replacement Phil Armstrong bowled well in his maxed out 10 over spell, dismissing Perera for 57 early on as well as some more wickets in the middle order. This was backed up by Ryan Gordon's tidy spell of 1-24. Challow remained on top yet struggled to finish the job as Didcot captain, Richard Cook frustrated the bowlers towards the end with an important innings of 42* from just 50 deliveries. Harris returned to finally finish the job, with Didcot scrambling to a competitve 190. The Challow captain finishing with figures of 1-41. The pick of the bowlers, however, Phill Armstrong with an impressive 4-40 from his 10 overs.
Challow's run chase couldn't have started much worse as Adam Webb had the visitors on the ropes dismissing both opener Justin Penrose and number 3- Ryan Gordon for 0. At 12-2 Challow had seen many of these games end badly in the past. Freddie Robson stayed strong and took a very mature approach to the situation as he was joined by the free flowing Shaun Burningham. After a slow start, the partnership started to build when they saw off Didcot openers Webb and Oscar Bean. Richard Cook(0-39) had a spell to forget when Burningham settled himself by hitting 23 from one over. While spinner, Alex Hills managed to build pressure, it was comfortable for Robson and Burningham from the other end, scoring quickly off the bowling of Ceri Holmes and Scot Wheeler who was thrown into bowl as Burningham and Robson were both in a confident mood. The partnership of 119 saw Challow to 131-3 when Burningham was eventually caught on the boundary for 62 from only 52 balls. Hills(2-26) then took a second wicket quickly as he dismissed Robson for 59. At 138-4, Challow still had a job to do. Robert Jones-Walters and Joe Harris took the job lightly after continuing on from Robson and Burningham's hard work after building a strong partnership for themselves. Finishing the job in just 33.1 overs with scores of 20* and 29* respectively.
This comfortable 6 wicket win for Challow from a position of 12-2 shows great promise going forward into their opening league game of the season against Bicester and North Oxford at home this coming weekend.