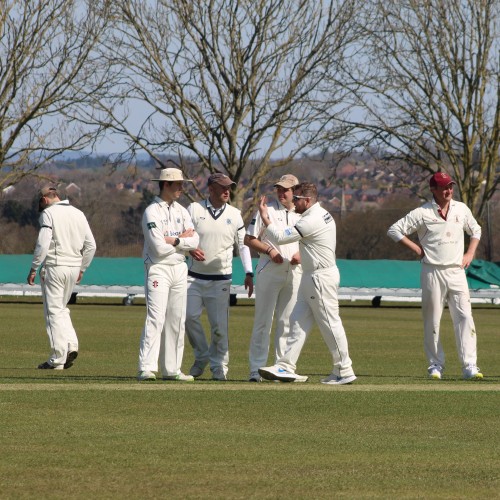 On a glorious, sunny afternoon Challow opened their season campaign with a friendly with Gloucestershire County league Langford. Challow started the day well with captain, Joe Harris winning the toss and opting to bowl first on a fresh strip for the first game of the season. After some loose deliveries first up from Ross Packham and Conor Jones struggling to find their lines, Jones managed to get Challow's first wicket of the season with an edge from opener Tom Stevens to 2 nd slip for just 4. Both openers finished their spells strongly including a maiden from Jones and just 12 runs from 5 overs for Packham. Going steadily, Langford found themselves 44-1 from 13 overs after a steady start from Marc Gregory and an erratic first over from debutant off-spinner Phil Armstrong. The latter quickly found his line and picked up the wicket of opener James West (19) in his 2nd over. Although not scoring at a devastating rate, Langford were on top as wickets dried up throughout Gregory (0-30) and Armstrong's (1-34) spells. At 97-2 after 24 overs and a strong partnership from Jake Romanek and Harry Stevens for Langford, captain Harris took matters into his own hands when he struck in his first over. Harris dominated the innings and stole the star light from the Langford batsmen as he took 6-22 in his 8 overs. As Challow began to get on top in the game, Langford number 8 Ben Brown (32) struck 2 in an over, taking advantage of the short boundary from the bowling of Alex Dawson (0-34). Jones returned for a short spell at the end of the innings where Langford were bowled out on the last ball of the innings, Jones returning with impressive figures of 2-29, but the bowling side kept in the match by Harris' heroics. Chasing 175 to win from their 40 overs, Challow never got going in their opening overs, with opening batsmen Luke Jones and debutant Nick Moorman both falling for single figures to the economical bowling of Ali Main(2-10). Following Main's 8 over spell Challow found themselves on 36-2 from 15 overs, well behind the required run rate. Tom Pill(33) and Ben Cox(15) eventually got a few boundaries away and started to feel more comfortable at the crease before Cox fell to the bowling of Tom Jones(1-33). At 79-5, Challow required 96 to win from just 14 overs and looked dead and buried in the game following a mix up causing for Phil Armstrong to be run out for just 6. Needing to score at close to 7 an over, Harris looked to follow his 6fer with quick runs to give the hosts a fighting chance in the game. Partnerships between Matt Frost and Harris(35) and Frost and Jones(25) kept the expected result at bay for a few overs. But when Frost eventually fell for a hard fought 39, the game appeared gone. Number 11 Alex Dawson, managed to get Challow to a respectable 161 with a quick 20 not out, but was no more than a consolation in the final few overs when an unreachable target was required. With many positives to take from the match early on in the season, despite the loss, Challow look to bounce back next week with a double header for the 1 st and 2 nd XIs and they face up to Oxford 2nd and 3rd XIs.